Daishi Tanaka, a 19-year-old sophomore at Harvard University, is like many of his classmates.

He balances a rigorous course load with his responsibilities as codirector of a student group on campus called Act on a Dream, which focuses on immigration issues.

But as an undocumented immigrant living in the US, Tanaka experiences a level of uncertainty about his future that many of his peers do not.

There is, for example, the uncertainty about the next time he will see his parents, who, after living in the US for 13 years, left last summer amid increasingly negative rhetoric from Donald Trump about immigrants, according to Tanaka.

His father went to Japan, his mother to the Philippines — where they both are trying to work through immigration paperwork so they can live together in the same country — and are barred from reentering the US for 10 years.

And he's unsure if he will continue to have protection under the Deferred Action for Childhood Arrivals program, which was put in place under the Obama administration and provides temporary protection for undocumented children who were brought into the US before the age of 16.

"I don't know if the DACA program will stay," Tanaka told Business Insider. "Donald Trump can revoke DACA and repeal everything that DACA provides for undocumented students. It's a very, very tense time."

On Wednesday, Trump signed two executive orders aimed at immigrants living illegally in the US: one to build a wall along the US-Mexico border, the other to punish so-called sanctuary cities that protect undocumented immigrants.

As the US government promises to ramp up deportations, students at Harvard like Tanaka look to their school administrators for protection with a declaration that Harvard is a sanctuary campus.

That support has not yet come. Tanaka is unsure it will ever come. Tanaka with his parents. Daishi Tanaka

Tanaka was born in Japan but came to the US in 2004, traveling with his mother, who is Filipina, and father, who is Japanese, on a tourist visa. Even though he was just 6 when he moved, he remembers falling in love right away.

"For some reason, the US felt like a home, even though I wasn't born here," he said.

He entered the first grade and learned English in three months. What has stayed with him all these years is his first experience in his elementary class.

"I saw kids of all shapes and sizes, all colors, all backgrounds, all under one flag," he said. "This unity of respecting everyone's individuality and diversity that really struck me as what's beautiful about this country."

Tanaka settled into his school and began to excel. He was happy there and eager to continue his studies. His parents had been hopeful that once they were in the US, there would be an easy path to citizenship. They began talking to immigration lawyers about their best chances of extending their stay.

They were told that it would be much more difficult for them to gain US citizenship all at once, with his mother and father having citizenship in different countries. It would require each going back to their home country — Tanaka and his dad to Japan and his mom to the Philippines — and there would be no guarantee they'd all be able to reunite in the US. So they decided to stay where they were, knowing that life as undocumented immigrants in the US would be difficult — but at least they'd be together.

As a child, and later into his adolescence, Tanaka says he wasn't explicitly aware of his undocumented status, though he noticed things his family wasn't able to do, like get driver's licenses or afford a house.

"I just knew that we were like second-class citizens," he said. They also had to move around year to year, meaning Tanaka had to change schools as the family chased employment.

Still, when Tanaka reflects on his childhood, he doesn't just talk about the strain his status caused. In some ways, he says, he's a better person for it — it made him "resourceful and independent."

Things became a lot clearer about Tanaka's undocumented status when he started applying for colleges. Without a Social Security number and legal status, he was unable to submit a Free Application for Federal Student Aid, or FAFSA, to show his eligibility for aid from the federal government.

A strong academic background solved this issue for Tanaka. With acceptance to Harvard, which offers need-blind financial aid to all students, undocumented and international included, he had a path to college.

But uncertainty continued to follow him. "There were moments when I was working so hard in high school but I didn't even know if I'd be able to work for employment later on," he said.

Hope for a sanctuary campus Across the nation, there are roughly 800,000 young immigrants who have been granted DACA protection. Many of these young people do not know any other home than the US.

Created by Barack Obama in an executive order in 2012, DACA provides protection from deportation, a Social Security number so people can work, and, depending on the state, in-state-tuition eligibility.

On Harvard's campus, Tanaka is in relatively small company. Of the roughly 6,700 undergraduate students, he is one of about 40 undocumented students.

Despite their small representation on campus, many of the undocumented students, along with other supporters and advocates, have been highly visible and forced the administration to respond to calls for Harvard to be declared a sanctuary campus.

Tanaka said that, fundamentally, its designation as a sanctuary campus would mean Harvard pledges to protect students in three ways: Harvard would refuse to reveal information about undocumented students if asked by the authorities, campus police would refuse to aid federal enforcement officers in efforts to detain or deport undocumented students, and Harvard would require federal enforcement officers to have a warrant to enter campus.

But the push to declare Harvard a sanctuary campus had a setback in December when Harvard President Drew Faust announced she would not do so, saying it may harm the very students such a declaration aims to protect. "I believe it would endanger, rather than protect, our students, and that is not something I am willing for this institution to do," she said, according to The Harvard Crimson.

It was a decision that distressed students, especially as some other Ivy League schools — like Trump's alma mater, the University of Pennsylvania — said they would do so.

"I'm very disappointed in Harvard not declaring themselves a sanctuary campus," Tanaka said. "The prospect of it doing so is very small at this point."

For its part, Harvard says that it does offer protections to undocumented students.

"While we will not declare Harvard a 'sanctuary campus', we have made clear that the Harvard University Police Department does not inquire about the immigration status of faculty, students, or staff, and the department is not involved in enforcing federal immigration laws," Harvard spokesperson David Cameron told Business Insider.

"The University does not and will not voluntarily share information on the immigration status of undocumented members of the community, and law enforcement officials seeking to enter campus must first check with campus police and obtain a warrant for cases involving immigration laws," he continued, noting that individuals who need legal services are able to obtain them through a program at Harvard.

The fate of DACA remains tenuous. Trump has pledged to overturn it, though last month he indicated he would "work something out" for the young undocumented immigrants that DACA protects. Wednesday's executive actions taking a hard line on immigration certainly will cause those affected by DACA to worry about its fate.

Perhaps the designation of a sanctuary campus would do little to quell this fear. Faust herself argued that the term has no legal significance.

But for Tanaka, the designation is more meaningful in terms of the message it signals to the outside world.

For him, he said, the message would be that "a prestigious university with a lot of political power leverage and money is taking this stance to do what's right." 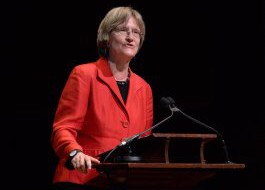 Harvard president on Trump: 'This administration seems unpredictable in many ways' 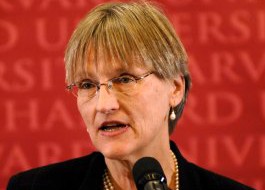 Harvard president hits back at Trump's immigration ban: 'Nearly half of the deans of Harvard's schools are immigrants'