• Piazza's parents called the treatment of their son "torture."

The parents of Timothy Piazza, the 19-year-old Penn State sophomore who died after a hazing ritual in February, described their son's final hours as torture.

"What happened throughout the night was just careless disregard for human life," Piazza's father, Jim, told Matt Lauer on NBC's "Today" show. "They basically treated our son as roadkill and a rag doll," he continued.

"Nobody should consume that much alcohol,'' Piazza's mother, Evelyn, said. "That's torture."

Piazza's parents said no one from Penn State's administration or Beta Theta Pi, the fraternity that Piazza was pledging, attended his funeral. A representative for Penn State told the family in advance that "he was unfortunately likely unable to attend the funeral," though vigil did take place on campus, according to NBC. Eighteen members of Beta Theta Pi, as well as the fraternity corporation, had charges brought against them Friday. Facebook/PSUCareerServices

Piazza's final hours began at about 9 p.m. on February 2, when he showed up to Beta Theta Pi for a pledge event called "The Gauntlet," an event at which pledges drank at a series of alcohol stations and consumed four to five drinks in as little two minutes. Fourteen hours later, he was rushed to the hospital. He died the next day.

Eighteen members of Beta Theta Pi, as well as the fraternity corporation, had charges brought against them Friday in connection with his death. Eight of the 18, along with the corporation, have been charged with involuntary manslaughter. The other charges, totaling more than 1,000, include aggravated assault, tampering with evidence, hazing, and providing alcohol to minors.

The events leading up to Piazza's death have come into clearer focus since the charges were filed. A surveillance camera in Beta Theta Pi's house captured most of the events of February 2, and a grand-jury presentment has provided a minute-by-minute account of "The Gauntlet" and the hours before Piazza's death.

9:06 p.m. — Piazza comes into view on the camera. Pledges begin going through the gauntlet and drinking at different stations.

9:21 p.m. — Piazza is handed a bottle of vodka to drink from, then shotguns a beer. Other stations are not visible from the camera angles.

10:46 p.m. — On camera, a fraternity brother is visible "pointing agitatedly" toward the basement steps.

The fall was not captured on camera, so a detective outlined it in the presentment.

In an interview with the police, a fraternity brother said he saw Piazza laying "face-down at the bottom of the steps." In a text message that night at 11:53 p.m., the brother wrote: "Also Tim Piazza might actually be a problem. He fell 15 feet down a flight of stairs, hair-first, going to need help."

10:47 p.m. — Piazza is carried upstairs by four brothers. He appears unconscious, and there is a visible bruise on the left side of his abdomen.

11:14 p.m. — Kordel Davis, a newly initiated brother, is seen pointing animatedly at Piazza. He testified before the grand jury that he saw Piazza "making weird movements on the couch," and Davis screamed at the other brothers to get help.

11:15 p.m. — Another brother shoves Davis into a wall. In his testimony, Davis said that he was told to leave and that the others had it under control.

1 a.m. — Brothers who were in the room saw Piazza vomit and twitch on the couch. They "backpack" Piazza, putting textbooks in a backpack in an attempt to ensure he wouldn't roll onto his back and choke on his vomit.

1:48 a.m. — Piazza rolls off the couch and onto the floor. Beta brothers forcefully put him back on the couch.

1:50 a.m. — A brother who appears to be frustrated strikes Piazza hard in the abdomen.

3:22 a.m. — Piazza tries to regain his feet but falls backward and hits his head on the hardwood floor.

3:54 am — Piazza tries to stand again but falls facedown on the floor.

5:15 a.m. — A Beta brother steps over to him before getting water and going back upstairs.

6:57 a.m. — A fellow pledge records video of Piazza on Snapchat.

7:18 a.m. — Piazza staggers toward the basement steps. He is not seen again on camera until several brothers and a pledge carry him upstairs again. A fraternity brother testified that he found Piazza in the basement at 10 a.m. breathing heavily, with blood on his face. He felt cold to the touch, with pale skin and eyes half-opened.

For the next 42 minutes, surveillance shows Piazza lying unconscious while brothers shook him, covered him with a blanket, wiped his face, and attempted to dress him.

At 10:48 a.m., a fraternity brother called 911. Piazza was transported to the hospital and died February 4. He had a ruptured spleen and severe injuries to his head. A forensic pathologist estimated his blood alcohol content was between 0.28 and 0.36 when he fell.

Piazza's death has rocked Penn State's Greek life and magnified the dangers of drinking culture and hazing on campus.

The university has banned Beta Theta Pi from campus for at least five years and potentially forever, pending results of the investigation. Other Greek organizations are banned from recruiting new members until 2018, and other limits have been placed on the number of social events they can hold.

Penn State's president, Eric Barron, released a statement calling the details in the presentment "heart-wrenching and incomprehensible." He added that "the university community continues to mourn his tragic death."

The editorial board of The Daily Collegian, Penn State's student paper, also expressed concern and anger.

"Incomprehensible that a 19-year-old with his whole life ahead of him could be alive one day, and gone the next," it said. "Sickening that young adults could be so careless and have such little respect for human life."

The board said it didn't believe enough had been done to ensure a similar tragedy wouldn't occur in the future.

Penn State's Interfraternity Council "failed to tackle the underlying cause of Piazza's death — hazing," it wrote. Eighteen members of Beta Theta Pi, as well as the fraternity corporation, had... 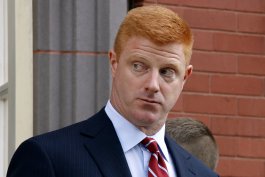 Penn State to be fined a record 2.4 million after a 5-year investigation of how it handled complaints about Jerry Sandusky

The fine was the result of a 5-year investigation Facebook/PSUCareerServices... 'One entered the city like a god; one scuttles in now like a rat' — See beautiful pictures of New York's old Penn Station before it was torn down

These lovely pictures will make you long for Penn Station's glory days....